How Do Projector Screens Work? 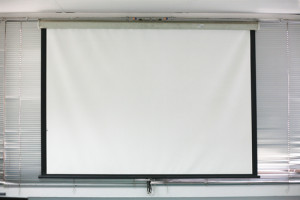 How Do Projector Screens Work?

In general, a projector projects images onto a projector screen, which displays the images. The projector beams light through a lens onto the screen. Now, if the source of light (projector) is in front of the screen and behind the viewer, the image display is via front projection. On the other hand, back projection occurs when the light is behind the screen (the viewer is looking at the image and source of light from the opposite direction). In general, screens display images projected onto their surfaces.

There are various materials used to make projector screens. However, the most common material is fabric. Some of the important factors to consider when choosing such a fabric include:

On the color front, you should go for matte white if you want to install a screen that will deliver great picture clarity. Other available colors include grey and reflective white. Finally, one could buy and install a textured or non-textured projector screen. Non-textured screens work well in situations where the audience views images at a narrow angle. The opposite is true for textured screens.

Wall Mounted Screens
Wall mounted screens tend to be rigid. They are suitable for people who want to reproduce images with exact geometry. This type of screen is commonplace in movie theaters.

Portable Screens
A portable screen is one that you can erect, dismantle, and move to another location or room easily. One can use a portable screen in a classroom or conference room to display images during a presentation or lecture.

Pull Down Screen
Most pull down screens are made of fabric that you can roll into a container/case when not in use. This feature makes them particularly ideal for use in small spaces/small rooms.

Ceiling Recessed Screen
You can lower a ceiling recessed screen whenever you need to watch a movie and then raise it to the ceiling when the movie ends. Better yet, instead of lowering and raising it manually, you can install one that has remote controlled electric motors. This makes it easier to operate from the comfort of your chair.

Switchable Screen
A switchable screen essentially displays images from either side or just one side. These screens are widely used by businesses to advertise goods and services on store windows. They enable the target audience to view adverts when either inside or outside the store.